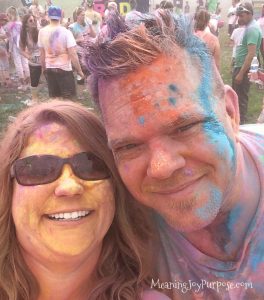 Call us cliche, the beginning of a joke or a opening scene of a romantic comedy….but here’s how my husband and I officially met.

and his eyes meet the eyes of a beautiful girl across the crowded bar.  (I may have exaggerated the beautiful part….but I was 22 and in my ‘prime’…so though I never would’ve called myself beautiful at the time..18 years later, I wish I knew then how awesome I was)

Yup, that’s how it started for me and my hubby of 17 years.

I was a blackjack dealer at a charity table in the corner of a crowded bar on a Friday night in February when he wandered in with some friends.

But the crazy part was, although we had never spoken before, we knew who each other was.  And he had no idea I had a big secret involving him.

Ian and I grew up in the same church.  And by ‘grew up’, I mean I was there every Sunday….he came with his family every Christmas and Easter.  I had seen him there, and even thought he was really cute.  But since he was only there twice a year, a year younger than me, and worst of all, went to my rival high school….he was out of the question!

He quickly made his way to my blackjack table, where he spent the rest of the evening.  We chatted, flirted all night and I thought things were going really well.  He seemed confident, interested in me, and almost cocky.  I was intrigued, and attracted.  I thought I might actually be giving my number out that night to him.  (I had a ‘policy’ about giving out my number to guys who played at my blackjack table.  The ‘policy’ was…if I was interested in you, I’d give you my number.  If I wasn’t interested….well…I’d say there was a ‘policy’ that us dealers weren’t allowed to give out our numbers.  Have I mentioned I was 22, incredibly stupid and not honoring God at this point in my life?  No?…well, you had to have figured that  out by yourself by now. 😉

I was planning to have a date the next night with a bouncer that worked at the bar.  I had a thing for bouncers in that season of my life.  Refer to above…the part about me being 22, stupid and not honoring God…yeah that.

So here’s where his version of ‘our’ story and mine disagree depending on who’s telling it.  But since I’m writing this….you’re getting my version.  And it’s the right version…so what’s the difference? Lol!

Said bouncer was done work and came to say goodbye to me and confirm that we were going on a date the next day.  After we chatted for a minute, he hugged me goodbye.

At this point in the story, my husband is now trying to convince everyone that we tell our story to that this guy kissed me.  I don’t remember ever kissing this guy (refer above to young, stupid, not honoring God)…but I know that I never would’ve let him kiss me at my blackjack table.  That would’ve hurt my tips from other players.

To make a long story shorter, my husband saw some sort of affection between me and the bouncer and pretty much shut down.  He got quiet and left shortly after, without asking for my phone number.

I was surprised, disappointed and decided to take matters into my own hands.

So a few days later, a note arrived at his house that said “You forgot this the other night.”  And below those words were my phone number.

This is the point in the story that people always ask if I was upset, crushed, or hurt.  What did I do since he didn’t call me?

I went on dates with other guys.  I figured if he wasn’t interested enough to call, I better go on with life.  So I did.

But a few weeks later, he meandered in the bar again.  Nervous, scared and ready to grovel.  I made him work for my attention, gave him a really hard time, joked at his expense…and yet…hoped when he promised he’d call the next day that he really would.

And 19 years after that first official meeting, we’ve been married 17 years, have 3 awesome boys, have moved to a new state far from our whole family, are serving the Lord in our home and our community and are still in love.

But our story isn’t just about us.

Our story couldn’t be our story without God writing it Himself.

Because the reason I gave the guy-who-never-called-after-I-took-the-bold-step-of-sending-my-phone-number-in-the-mail a second chance was because God had placed something in my heart years before that convinced me I should.

I’ve mentioned that my husband and I grew up in the same church.  My senior year of high school, right around graduation, during a service our pastor got up and asked for specific prayer for a young man who was battling for his life with meningitis and encephalitis.  (Specific prayer requests from the pulpit were very rare and cause for great concern) He had been in the hospital for weeks and at that point the doctors weren’t sure if he’d survive.

That’s exactly how it felt to me that day sitting in church.

And I’m sure you figured out who that young man was battling for his life.

And I’m not saying that I think it’s my prayers that saved his life…but just maybe they are.

But what I do know is that we serve a God who hears, a God who is faithful, a God who loves us.

And if He weren’t, my life would look nothing like this. 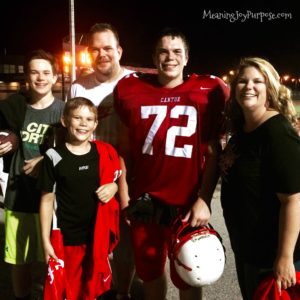