My pastor is preaching through the book of Luke this year.  And in his sermon yesterday, he read Luke 2 and preached about the worst parenting fail in all of history.  Those are my words, not his….

41 Now his parents went to Jerusalem every year at the Feast of the Passover.42 And when he was twelve years old, they went up according to custom. 43 And when the feast was ended, as they were returning, the boy Jesus stayed behind in Jerusalem. His parents did not know it, 44 but supposing him to be in the group they went a day’s journey, but then they began to search for him among their relatives and acquaintances, 45 and when they did not find him, they returned to Jerusalem, searching for him. 46 After three days they found him in the temple, sitting among the teachers, listening to them and asking them questions. 47 And all who heard him were amazed at his understanding and his answers. 48 And when his parents[g] saw him, they were astonished. And his mother said to him, “Son, why have you treated us so? Behold, your father and I have been searching for you in great distress.” 49 And he said to them, “Why were you looking for me? Did you not know that I must be in my Father’s house?”[h] 50 And they did not understand the saying that he spoke to them. 51 And he went down with them and came to Nazareth and was submissive to them. And his mother treasured up all these things in her heart.

52 And Jesus increased in wisdom and in stature[i] and in favor with God and man.

So did you catch that?

Now… I don’t want to imply that Jesus was lost.  Jesus knew exactly where he was.  He was not lost…He was in the temple, His Father’s house.

But his parents didn’t know where He was.

Talk about a parenting fail!

As a church that does expository teaching, this is not a story in the Bible that my pastor just picked to prove a point or illustrate a topic he wanted to cover.  It literally was the next part of Scripture for him to preach through this week.

And among many other wonderful points (Did you know that only men were required to go to Jerusalem for Passover?  Did you catch it that Mary went as well, even though she was not required by the law to attend?) he made an excellent point…if the parents of the Son of God lost him….for a whole day no less!…those of us who are parenting today need to give ourselves a little grace.  He talked about so many ‘experts’ these days sharing their insight which is creating a lot of pressure, guilt and perfectionism in parenting today.

But here’s the reality…we are going to fail as parents.

If we weren’t ‘failures’ as parents, we wouldn’t need Jesus!

This doesn’t mean that I can throw my hands up in the air and let my boys raise themselves from here on out, but it is a great reality check to remember that I will have parenting fails.

And of course, we all doubt ourselves from time to time.  But let’s not set up camp there….instead let’s look to God, look to Scripture and most importantly ask God what He wants for our parenting.

And when you have a parenting fail, give yourself a break!

Figuratively, and maybe even literally!  Sit down with a cup of coffee, take a nap, go for a walk…..then take a deep breath, give your kids a hug and get back down in the parenting trenches.

Because, if Mary and Joseph can have a parenting fail like leaving Jesus behind in Jerusalem for a day before they noticed….we can all give ourselves a little grace. 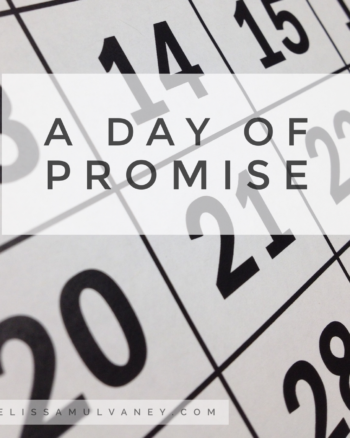 A Day of Promise
Categories: My Life..the chaos & crazy, Shining Through

Slow Down, Don’t Miss It
Categories: My Life..the chaos & crazy, Shining Through