1 The wisest of women builds her house,
but folly with her own hands tears it down.
2 Whoever walks in uprightness fears the Lord,
but he who is devious in his ways despises him.
3 By the mouth of a fool comes a rod for his back,[a]
but the lips of the wise will preserve them.
4 Where there are no oxen, the manger is clean,
but abundant crops come by the strength of the ox.
5 A faithful witness does not lie,
but a false witness breathes out lies.
6 A scoffer seeks wisdom in vain,
but knowledge is easy for a man of understanding.
7 Leave the presence of a fool,
for there you do not meet words of knowledge.
8 The wisdom of the prudent is to discern his way,
but the folly of fools is deceiving.
9 Fools mock at the guilt offering,
but the upright enjoy acceptance.[b]
10 The heart knows its own bitterness,
and no stranger shares its joy.
11 The house of the wicked will be destroyed,
but the tent of the upright will flourish.
12 There is a way that seems right to a man,
but its end is the way to death.[c]
13 Even in laughter the heart may ache,
and the end of joy may be grief.
14 The backslider in heart will be filled with the fruit of his ways,
and a good man will be filled with the fruit of his ways.
15 The simple believes everything,
but the prudent gives thought to his steps.
16 One who is wise is cautious[d] and turns away from evil,
but a fool is reckless and careless.
17 A man of quick temper acts foolishly,
and a man of evil devices is hated.
18 The simple inherit folly,
but the prudent are crowned with knowledge.
19 The evil bow down before the good,
the wicked at the gates of the righteous.
20 The poor is disliked even by his neighbor,
but the rich has many friends.
21 Whoever despises his neighbor is a sinner,
but blessed is he who is generous to the poor.
22 Do they not go astray who devise evil?
Those who devise good meet[e] steadfast love and faithfulness.
23 In all toil there is profit,
but mere talk tends only to poverty.
24 The crown of the wise is their wealth,
but the folly of fools brings folly.
25 A truthful witness saves lives,
but one who breathes out lies is deceitful.
26 In the fear of the Lord one has strong confidence,
and his children will have a refuge.
27 The fear of the Lord is a fountain of life,
that one may turn away from the snares of death.
28 In a multitude of people is the glory of a king,
but without people a prince is ruined.
29 Whoever is slow to anger has great understanding,
but he who has a hasty temper exalts folly.
30 A tranquil[f] heart gives life to the flesh,
but envy[g] makes the bones rot.
31 Whoever oppresses a poor man insults his Maker,
but he who is generous to the needy honors him.
32 The wicked is overthrown through his evildoing,
but the righteous finds refuge in his death.
33 Wisdom rests in the heart of a man of understanding,
but it makes itself known even in the midst of fools.[h]
34 Righteousness exalts a nation,
but sin is a reproach to any people.
35 A servant who deals wisely has the king’s favor,
but his wrath falls on one who acts shamefully. 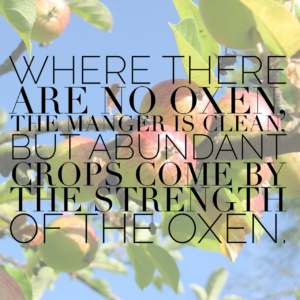 I’ll start by saying, I know my boys aren’t oxen, but there is a correlation between children and the reference to oxen in verse 4, at least in my mind.But sometimes they are as noisy, stinky and loud as I supposed oxen would be in a home.

Many times, sometimes, more than once in a day, I will have the passing thought of how much easier/cleaner/quieter/tidier/peaceful life will be once my boys are grown and launched.  In theory, my life will be much easier then.

It’s been said that trying to keep your house clean while you have kids living at home is like trying to brush your teeth while eating Oreos.

How true!
But as the days fast approach when my boys are going to be leaving, the first one in less months than I have fingers on one hand, I realize how much I will miss this.
Just last night the 3 of them were carrying on and being silly and laughing hysterically.  How bittersweet!

This momma heart was so happy to hear her kids laughing and enjoying each other.

But as precious as this sound was, I was so quickly reminded how that laughter will be missing one voice very soon.

And that truth grieves me.

I am thrilled and excited at the future God has brought my son to.  I have zero doubt that he is following God’s will for his life.  I am truly excited to see what God is going to do in and through him.

But him following God’s plan, following the dreams God has placed in his heart requires him to leave.  Our ‘manger’ will be a little cleaner.  A little quieter.  And that sounds awful to me.

I have seen the ‘abundant crops’ that have come by the strength of the ox in my family.  I have seen my boys choose to follow Jesus, I have seen them choose to be friends and not just brothers, I have seen them have quick repentant hearts when they know they were wrong.  (Don’t get me wrong, there have been many, many times of the opposite of these things, trust me!)

I am so thankful for the abundant ways God has blessed me, blessed my family.  The crops He has given me I do not deserve.  I have not earned them.  I am humbled by the way He has given in abundance to me.

So as I clean my dirty ‘manger’ today, I will thank God for the abundance of His gifts, HIs grace, His mercy.  And I’ll thank Him for the dirty fingerprints, the muddy shoeprints on the floor, the evidence of boys in the bathroom.  I might not enjoy the task, but I will choose to enjoy the ones who have created it. 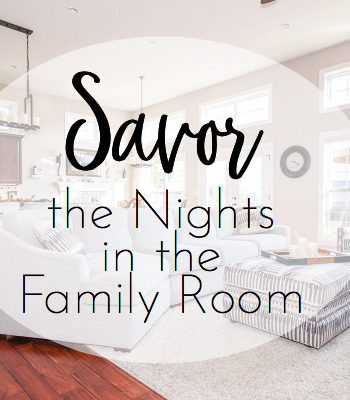 Savor the Nights in the Family Room
Categories: Motherhood Matters 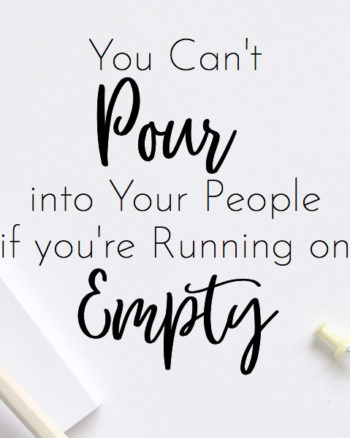 Take Time for You So You Can Give Your People​ Your Best
Categories: Motherhood Matters, My Life..the chaos & crazy