These boys are getting some sweet, well deserved media attention this week.

It seems that the adorable little blond boy named Jax wanted to get his hair cut just like his friend Reddy.  His plan was to trick his teacher so that she couldn’t tell them apart if they had the same haircut.

I hear the teacher played along.  How sweet of her to encourage these color blind boys.

This story reminds me of one of my most favorite memories of my sweet ‘little’ Luke.  (yes, the one I was lamenting on Instagram last night that now has bigger hands than me!!!  How did my ‘baby’ get so big!) 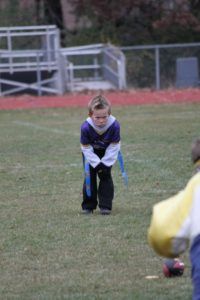 When Luke was in Kindergarten, he played on a flag football team.  They were actually amazingly good!  They had 2 fantastic coaches that kept it fun, but also taught the boys football skills well, (I still picture Luke ‘Shake n Bake’-ing as one of their drills), and the team was unstoppable.  We watched our guy get 15 yard penalties for tackling instead of pulling flags (oops!), while the refs laughed about giving 15 yard penalties to kindergarteners since it rarely happened, and never get a touchdown because he ‘only wanted to pull flags’ so he didn’t want to play offense.  We witnessed him fall in love with the game of football, the camaraderie of a team, and blossom under the leadership of coaches he adored.

When the season was winding down, the team decided to enter a tournament.  All but one of the boys on the team signed up for the tournament, and we bundled up and the Baltimore Ravens hit the field.  It was a blustery November weekend, but we enjoyed every second of the competition. (ok…I might’ve grumbled about being cold….)

On Saturday, during one of the games, Luke sat down on the sidelines when he wasn’t playing, and as was and is still typical of him, he started chatting.  He happened to strike up a conversation with Coach Garrett’s wife.  As they were talking, Luke asked her which child on the team was her son.

This was a simple and innocent question…..yet it showed one very dramatic thing about Luke, his eyes and his brain.

This mother was the mother to the only black child on the team.  Every other boy on the team was white.

Shortly after this conversation, she came and told us what Luke had said to her.  She was laughing and so delighted that our innocent, sweet boy hadn’t even made the connection in his mind that thought that she could be the mother of any of the boys on our team. We all had a hearty laugh, and my heart swelled with adoration for a boy who saw no color that day.

Perhaps we all can learn a lesson from Luke and from Jax and Reddy.

Let’s just see people for who they are, not their skin tone, their race, their upbringing, their socioeconomic status.

Is this an easy request? Heck no.

But it’s worth striving towards.

And it really is simple, if you think about it.

If we all just looked people in the eye, asked them a few questions, and learned about who they are, we could all make our world a better place.

Let’s try, as we go about our day, to take these boys’ example to heart.

Let’s all be color blind.